Alzheimer’s disease (AD) afflicts more than six million Americans alone every day, with no cure in sight. Ergothioneine however, is an amino acid characteristic of certain mushrooms and could hold the answer to earlier Alzheimer’s detection. The researchers demonstrate that this probe can detect the threshold, but elevated level of oxidative stress in a mouse model of AD compared to wild-type counterparts. This probe has the potential for early detection of AD. Further, it could report the response during therapy as well.

Pham and his team developed a robust chemistry for the synthesis of the precursor. Two advantages of using this probe for imaging AD. First, ERGO has high affinity for reactive oxygen species (ROS) products and oxidized metals; All of which are overexpressed in AD. Second, ERGO is distributed to the brain remarkably high, independent of the blood-brain barrier.

This probe itself is ideally suited for use in several different preclinical and clinical settings, both in hospitals and research laboratories. Several pharmaceutical or healthcare companies might be interested in various methods for monitoring ergothioneine (ERGO) distribution in a subject as well.

A provisional patent application has been filed. A publication can be found at: https://pubmed.ncbi.nlm.nih.gov/34531467/ 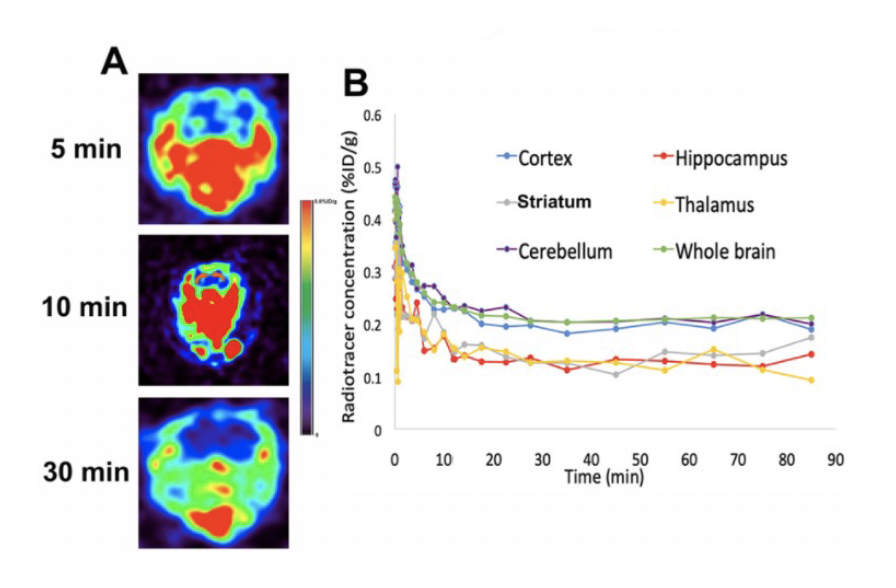 Figure 1: A representative axial view of a 5XFAD mouse (n=4) injected with [11C]ERGO simultaneously with the start of a 90 min dynamic acquisition in a microPET. (A) PET/CT image outlining the skull of the mouse at different timepoints; (B) The time-activity-curves (TAC) with-in different regions of the brain. %ID/g: percentage of injected dose per animal weight.